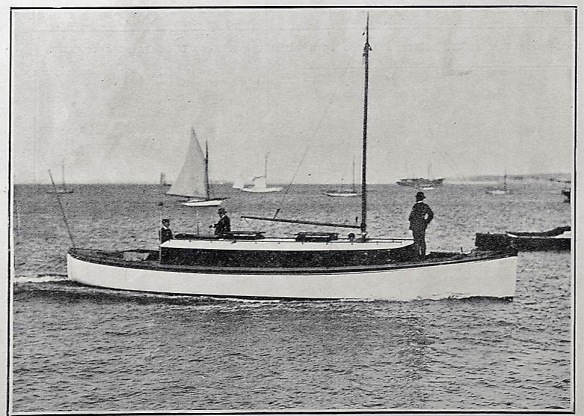 Another photo bought to us via Lew Redwood’s FB postings – this time the Karoro, the Logan Bros built launch.

In the above photo we see her just after her launching on 21st February 1906.

If I have the facts right & she is the same bought – Harold Kidd has previously commented that Karoro went north to Whangarei in 1916 as a passenger launch owned by H H Jagger of Taurikura and had a name change to TUNA around 1932 when she was sold to the Thames (HDK – correct?)

Anyone able to comment on what became of her?

Harold Kidd Input – Like most launches she had a complex history, name changes etc. She was in Whangarei from 1916-1921, then to Gisborne 1921-1925, back to Whangarei, back to Gisborne 1928-1932 then Thames then to Auckland in 1934 to be sold by auction in a mortgagee sale on 13th July 1934 as TUNA, bought by J J Craig then sold to A.E. Hite. I think she might have been the fishing boat TUNA that reported a floating mine off Coromandel in late January 1941 owned by N. E Owens of Auckland, but there were many TUNAs.