So far there have been over 2,000 classic wooden boat stories featured on waitematawoodys & the viewing numbers (3,300,000) have grown from a dozen people to over 80,000. I have had some loyalists from day one but the big numbers have happened in the last 2 years – so not everyone will have been exposed to all the stories. Over the Christmas / NY period I have decided to take a peek back in time & feature some of the gems from the early days. Enjoy.

Have a great holiday & remember to take the camera / phone with you & snap a photo of any woodys you see. Email them to waitematawoodys@gmail.com 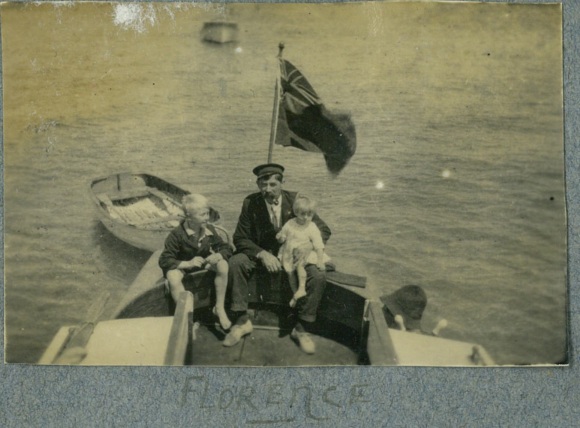 Todays photos of Florence (1910, HN Burgess) are from Clare Jordan. Clare found them in an old album of her  great-grandparents (Jim Turner), they show one at sea, two with the life preserver ring and one that looks like on a creek somewhere, dated early 1920s. Clare’s not sure where the Creek area is,  but commented that it looked like her family spent a bit of time there camping.  They had a batch in Titirangi, but Clare felt it didn’t make sense for Florence to be on the Manukau Harbour area?
Jim Turner spent a lot of time with his best mate (Alexander Lewis) at Jenkins Bay, Titirangi.  Alexander (Sandy) had something to do with the VCC.
Claire’s not sure who the people are, the man in the photos looks like the same person with the captains hat on.

I have forwarded these photos to Florence’s current owner Adam Wild & as expected Adam was rapt to get them, he is currently looking at some subtle rework to the painting scheme of Florence’s superstructure and commented that these photos will assist greatly.

Enter Florence in the ww search box to see more

FLORENCE spent her years from 1922 in Whangarei owned by J.C. Reynolds but, if the companion pic of JEAN GRAY is anything to go by, the album contains pics of the period before that and associated closely with people in Victoria Cruising Club. FLORENCE was owned in 1919 by F. Price, like JEAN GRAY’s owner, A. Lewis and later A. Hazleman, a VCC stalwart, and was Vice-Commodore from 1920. In fact, the life ring in the lowest pic has “VCC” on the bottom. So the pics pre-date her Whangarei period. Quite where the creek pic was taken is anyone’s guess but I don’t think it could have been on the Manukau unless they fitted FLORENCE with wheels. Just to confuse things a bit, there was a FLORENCE on the Manukau, owned by Pardington, but it was only a 20 footer.
So, these are companion pics to the JEAN GRAY pic, featuring VCC notables of the time.