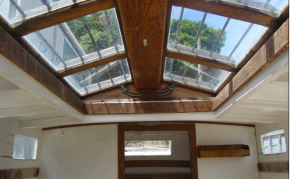 Looking for a good entry level classic motor launch? Rangitira is currently for sale on trademe. The listing states that she was built in 1929 by Collings & Bell & as expected of a vessel of this era is kauri carvel plank construction.
At 32′ & powered by a Ford 60hp diesel engine that pushes her effortlessly thru the water & she is therefore very economical to run.
The photos of her were taken over the last few years. While her interior is a little tired, she has good bones & has not been ‘mucked around’ with. Very usable as is, but a restoration would be relatively straight forward.
I do not normally mention prices on ww but at $18,000 it is a good entry into classic boating.

As always – ww is interested in hearing more about her past.

Stolen from her mooring by  school boys from an Auckland boys school and taken to Waiheke.Garboard plank smashed and she sunk. Then refurbished by Derek Dempster.  Sold to me by a Mr Pack in Auckland in 1989  as a  Dick Lang launch. He purchased it from a Whangarei owner who installed the butterfly hatch. Sold by me in 1991 to an American who took her to BOI. Many fond party memories.A great boat.