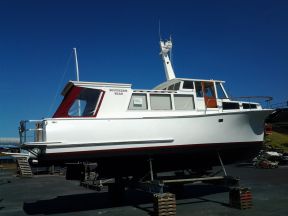 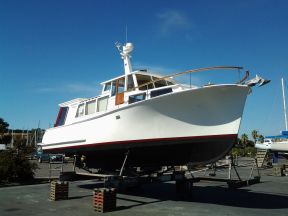 photos & details ex Ken Ricketts
The present owner was told SS was a ‘Shipbuilders kit set’ (was there such a thing?) & possibly built at the Wade River c.1964. She is a 34 footer built of 3 skins of Kauri on opposite diagonals & is powered by a Lees converted 6 cyl. Ford diesel, with an underwater exhaust, & by the size of the propeller, possibly has a 1 to 1 gearbox.

When purchased 14 years ago she was called South Seas but the owner has extended the name to Southern Seas.

She is presently kept at Gulf Harbour & was previously moored at Westpark Marina.

She was out of the water for several years for a fairly extensive refit & including substantially rebuilding the cabin top, which had been in bad shape.

A little too modern for my taste but a nice little ship that appears to be well presented.AH