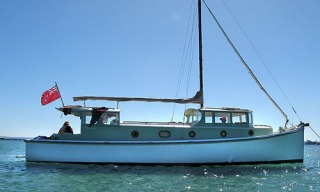 My ‘eyes’ at Gulf Harbour marina sent me a few photos of one of my favorite launches, the 1917 Joe Slattery designed & built Pacific, undergoing a wee make over.

Each to their own but I have always liked the mint green topsides on Pacific, well as of yesterday thats all changed. Appears that the topsides have been taken back to bare timber & have been repainted with a wood tone paint, this used to be very common on launches. In fact if you enter Pacific in the ww search box & hit enter, you will see some old movie footage of her when she had this finish before. Photo add also from the mid 1980’s ex Nathan Herbert.

Will be very interested to see the finished job, in the flesh. 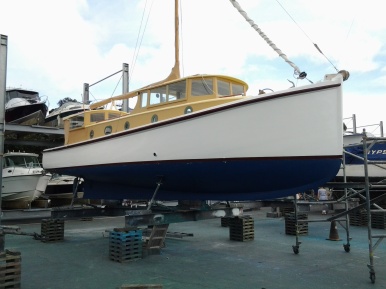 Pacific is now in the ownership of Nathan Herbert & getting a major dose of TLC.

The photo below shows a change to her appearance – as you will see from the above gallery, she has sported several looks. The new ‘white on white’ makes her look a lot bigger.