Zephyr was designed by Dick Lang & almost certainly built by him circa early 1940s.

Photo as she was, in 1948/49, taken by me at Schoolhouse Bay Kawau — wonder where she is now? .Possibly had a converted truck engine at that time. Have no other history or info — Ken Ricketts just liked the look of her when he took the photo. If anyone can help with more info please post.

Andrea has located a couple of photos, see below.  Reproduction is not the best but we roll with that.. The one on the skid, is from when Andrea’s grandfather first brought her.  Andrea commented it has her grandmother, uncle (and she thinks her aunt). Andrea  believes she was having her motor removed.  Her grandfather (Mac Kelly) thought she was to thirsty and put a smaller engine in.
The 2nd photo is of her has Mac standing and one of his sons sunbathing on her roof.
Andrea is not sure of dates for these photos but believes it would have to be in the 1950’s.
Zephyr remained in their family until about 1985 when she was sold to a man from Auckland who Andrea was told was the gent who took her bridge off. After that Andrea didnt know what happened to Zephyr until she received an email WW and then read Logan’s post.
Andrea has promised to continue to track down any more information and photos, so it can be added to her story. 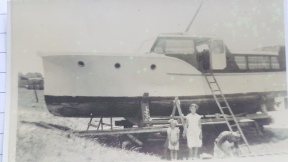