Today’s woody comes to us from Bryce Strong’s photo collection – another CV-19 clean out bonus.
Above we have the launch Waikere, an unknown to me, so keen to uncover her past and whether she is still around today.
The top photo is dated Easter 1988. The bottom photo lists the location as Ponui Island, and is dated March 1989.  This photo comes with an added bonus – the woodys in the photo are (L>R) Lady Margaret (1940 Dick Lang), Altair and Waikere – the bonus is that I have never seen a colour photo of Altair with varnished coamings and pre the ‘block of flats’ she now carries (current photo below). 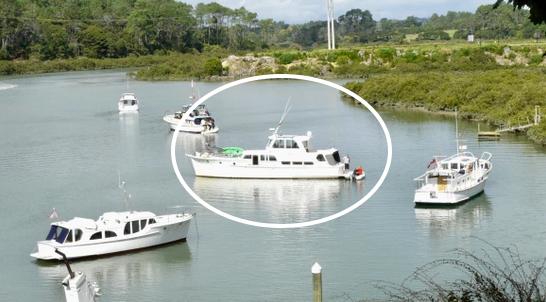 Input from Jeff Norris – Waikere belonged to my brother Dave Norris back then he used to keep it up the Clevedon river on a private marina along side Altair and a another boat called Apacha. He told me she was 32’ and built by Shipbuilders with a carvel hull and powered by a 100hp Ford