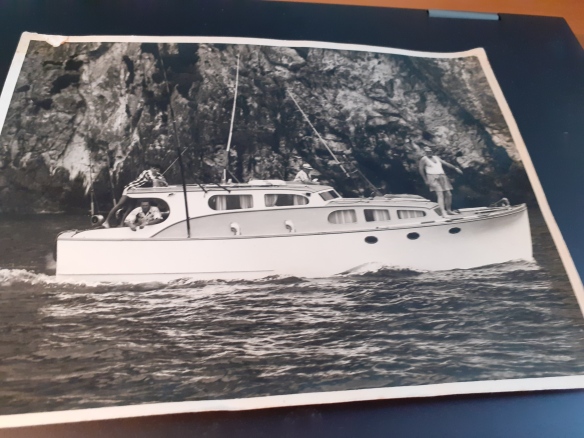 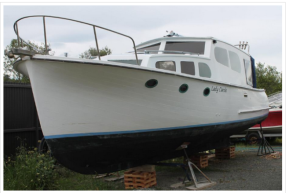 Back in October 2017 I was contacted by Nelson boat builder / restorer Peter Murton seeking info on a launch named Lady Carole (colour photos above) that he had in his shed for some TLC. At the time Nathan Herbert commented that at one stage Lady Carole was owned by his father’s uncle (Pat Smith) & was based at Whangaroa.
Fast forward 2-1/2 years and I’m contacted by Jean Martinovich whose father, Gordon Thompson, owned a boat called Lady Carole in the 1950’s/60’s.
Jean mentioned that she had a photo (b/w above) of the boat with her Dad at the helm and others on board in the Bay of Islands where they spent many days, weeks and years deep sea fishing. The boat was moored at Tutukaka.
Jean’s brother, Colin Thompson, has told her that their father purchased Lady Carole for 2,760 pounds from Ivan Watkins who at the time owned Whangarei Tractor Company. Colin believes the boat was built by Demmings.
In my eyes the boats are one. But the man with the best eye on WW – Nathan Herbert can confirm that for us 🙂
Jean was born in 1945 and remembers the wonderful times they spent as a family in the Bay of Islands on Lady Carole and during the summer months at Tinopai a small beach place on the Kaipara Harbour. Jean’s grandparents retired there as her poppa had a love of fishing and boating.
Gordon used to transport Lady Carole overland on a large transporter truck and trailer to the Kaipara Harbour for the summer. At that time the boat was kept on a jetty at a small place called Raupo on the Northern Wairoa River as the family home was in Ruawai where Gordon was a butcher.
At some stage Gordon sold the boat and Jean later learned the boat got jammed under the Waitangi Bridge where she was damaged. She was sold to Gordon Campbell (date unknown) but he redecorated her and then sold her on. Brother Colin caught his first marlin on Lady Carole when he was 14 years old, he will be 79 this year.