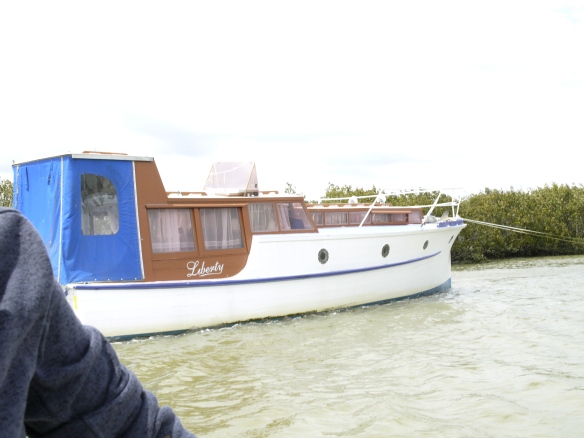 Last year on the Woody Classics weekend cruise up the Clevedon River I spotted the launch – Liberty on a pile mooring. Recently her owner contacted WW and advised that he has owned her for 30 years and believes she was built c.1928.

Currently powered by a BMW 35hp engine.
And woodys – she’s for sale.
Any woodys able to tell us more about Liberty?
17-02-2020 Update ex Philip Goddard
Philip has advised that his father has emailed him the photos below of Liberty. Probably taken late 1960’s when the family had purchased her.
His father recalls that she had no pulpit when purchased, so he had one made. He is certain it looks like the same one in today’s photos.

Harold Kidd Input – I have always thought she was the LIBERTY built by F &amp; S Shaw in Devonport in 1919 when both brothers got back from WW1. She had a 12hp Regal originally. I suspect she’s been lengthened as well as had a couple of tophamper additions. L.R. Matthews had her in 1947 when Commodore of PCC and Noel Mitchell owned her in the 1960s.