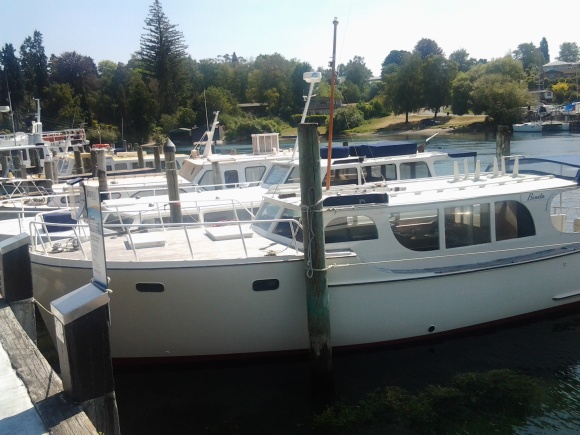 BONITA
All ww knows about today’s boat Bonita is that Ken Ricketts took the photo in Feb 2013 at Lake Taupo. So woodys can we shed some light on her?

According to the “HIstory Site for Boats of Taupo” she was built c1959 by Rogers Jones for himself to a design by Ted Herd for use on the Manukau. She’s 33′ x 11′ and has an 85hp diesel. There’s a full history of her there, but the Drakes probably know far more.

She arrived at Taupo in the mid 1960’s. Roger and Joyce Jones ran her commercially. Built by Roger’s father (a professional boat builder) in the late 1950s. He purchased two large kauri logs and had them milled (those were the days).

There have been three sisters built to the same Ted Herd design.

Used as a patrol boat for the Manukau Yacht Club. Also used for fishing trips up and down the West Coast, outside the Manukau bar.

I believe she is still in survey, but seems to be little used. She is, however, well maintained.

The Bonita is currently owned by my father-in-law, John Hunter (former head vet at the Taupo vet clinic), and is used regularly for fishing trips by him and the rest of our family. (I have also just painted a Chorus cabinet on Acacia Bay Road that features the Bonita moored in front of the Karangahake Cliffs)