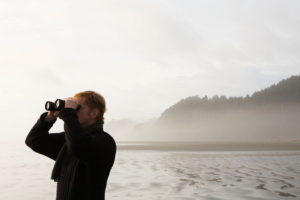 OWAKA
This ones a bit of a shot in the dark.
Stuart Lewis has contacted ww on behalf of his father who is looking for information on the launch Owaka, built by Collings and Bell c.1927.

Stuart’s fathers uncle, Jack Burdett of Whangarei, owned and carried out extensive work on her (in the 1970’s, he thinks) Jack used her as a work / pleasure boat servicing his farms on the Cavalli Islands and Limestone Island in Whangarei. Jack died in the 1980’s (unsure of exact date).

Any information any of you may have, or details on the later life of the Owaka would be appreciated.

OWAKA was launched by Collings & Bell in November 1927 for Lyttelton Ferries Ltd. W E (Edmund) Lane of Russell had her in 1953, Lane”s Sea Services 1961, Bay Sea Services 1963. Fullers had her after (?) that time using her with the barge LORNA. She was advertised on TradeMe last year, moored at Great Barrier, asking price $49,500 ono with heaps of images which I have at home (now in South Island touring).

Update & photos below from Baden Pascoe
Baden tells us that Myra Larcombe, who is now in her late 80’s, father Edmund Lane owned Owaka in the l950’s. She was then powered by a Kelvin K 4, 88hp.
Baden also advised that Owaka is still based at Gt Barrier Island.
Stuart – I have emailed you Myra’s contact details, in case you want to follow up with her.

Baden Pascoe Update 16/07/2014
The photo of Owaka being craned was when she was returned to Auckland from Otago in 1953. For her new owner, Mr. Edmund Lane 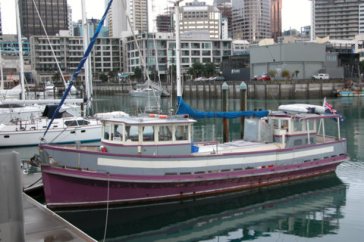 I joined Fullers late 1962 and drove Owaka mostly but also Miss Doris and Miss Ida  and quite a few of the others.

I don’t know when she got the extended wheelhouse and standing top but it must have been in Lanes time.

“Bay Sea Services” was a shelf company set up by Fullers to finance a third person to purchase Owaka and the barge Lorna as there were bad feelings between Fullers and Edmund. Owaka got the Ford engine shortly after I left in late 1963 when the Marine Dept. started to frown on the petrol start engines in passenger vessels. Fullers also had several spare engines in storage. I think Jack Burdett may have put the accommodation and after cabin over the old cargo space in the former aft cockpit because he lived on it when mustering on the Cavalli islands. She was getting a bit nail-sick from the pounding of the Kelvin when I drove her.

A partner and I looked at the Lidgard built “Mairie” then lying at a jetty in the Tamaki River but the K4 put us off. She is a beautiful and well built workboat, would be nice with a Gardner down below. We wanted a workboat that could tow a barge, be hire-able to the W.H.B. for general work, carry a reasonable size party for fishing and have a fair turn of speed as its a long way out of Whangarei. We finally settled on a Picton built launch “Rata”, 4-71 GM powered. I think she went to Fiji as a village boat.

He has given me some stories and info from his time aboard the Owaka, and I have some photos from our visits stored away.

Dad was living aboard Owaka for extended periods and ferrying material from Whangarei to the Barrier, where he was doing some work at the time. A lot of trips were made at night and alone, as Owaka was so easy to handle. Whenever possible, she was under sail or motorsailing.

He would keep marine band radio on all the time, and was sometimes called to assist others in the area by George Mason, who ran the Whangaparapara marine radio on Great Barrier.

When Dad bought Owaka she was painted white, and he did not make any structural modifications apart from installing an electric toilet, as the toilet was rather cranky.

UPDATE 15-01-2019 Photo of Owaka off Tapeka Point, taken by Nathan Herbert onboard Pacific – got to love the veggie garden 🙂