Today’s launch is Edna and comes to us via Lew Redwoods fb – the caption says ‘Edna aground on the rocks Wellington’.
Given the 44gallon drums strapped aft she must have joined the submariners club. We also see the classic bilge pump (man with a bucket) in action.
Anyone able to tell us more about Edna?
Input from Harold Kidd – EDNA (this one of many) was owned from 1933 in Wellington by A.C. Kellett and named after his daughter. This image is probably from 1950 when she went on rocks in the harbour. No details of builder; probably a rename; Gavin Pascoe may know more.
S0NAR MIA
I have been contacted by Matt Davidson who is trying to locate the whereabouts or information about his grandparents launch MV Sonar Mia. From what Matt understands she was a Carl Augustin Design built in New Plymouth around the mid 1960’s. His grandparents were Logan and Jean Laloli. Logan was one of the Laloli Brothers who founded and owned Laloli Brothers Furniture in Penrose Auckland for some 50 yrs. They sold Sonar Mia in Auckland in the late 1970’s and she may have located to the Bay of Islands. They owned her for some 10yrs and had her moored at Halfmoon Bay Mairina. Any information would be appreciated. 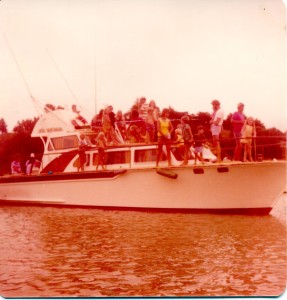