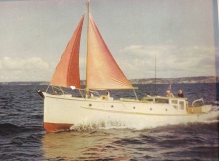 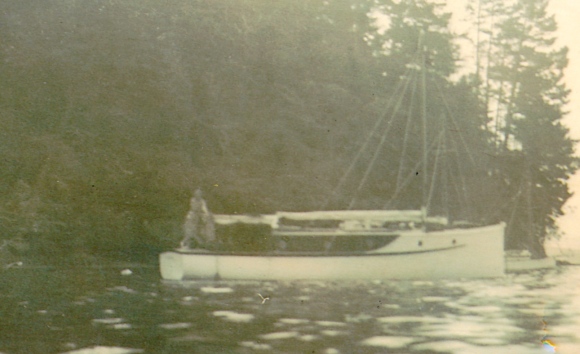 Some fine detective work by Ken has uncovered that the launch Korama is in fact Ronald William Grant’s (b1897-d1984) launch Thetis. Grant named the launch after his wife Thetis Maud Grant nee Braund (b1896 d 1985), a daughter of famous rugby player and yachtsman Albie Braund who named her after his friend Reg Masefield’s steel 5 rater of 1895. Albie named his first launch MAVIS B, after his daughter Mavis (b1899). To complicate matters the vessel has changed name numerous times across her life. More on this below.

She is presently owned by Leo Comesky, who bought her in October 2012 off Gus & Kelcey Gager who had brought her up from Tauranga c.1999. Comesky & Gager  have provided tech. & historical data & info., to Ken.

According to Comesky she was designed by Logan & built by Fred Mann, in 1922, in St Mary’s Bay. She was built for a Bob Knox of Grey Lynn, who apparently, along with his son, used to walk down to see her during construction, every evening. The Logan claim is questionable as she does not look like a Logan & if Arch Logan had designed her its highly unlikely that he would have allowed Fred Mann to build her. Mann was very much a spare-time builder at his John St., Ponsonby home, and nothing he built attracted much attention. His main job was looking after the horses for the Cashmores’ timber mill in Cox’s Creek and maintaining their craft.

Her original engine was an Ailsa Craig petrol engine & is presently powered by a 120hp Ford diesel.

Knox apparently owned her for 15 to 20 years & other owners include a Mr Dickson of Pakuranga (could be Jim Dickson an ASB manager of Pakuranga, who later had a sedan top 34 footer built by Owen Woolley who Ken knew well in the 60s & 70s), Bill Ridley of Pakuranga, Cyril Parker of Mission Bay (for approx. 6 years in the 1980’s – powered by a 110hp Ford diesel), Gary & Fay Lowe of Whangamata, Reg Hodson of Tauranga, & then she went to Picton. She was owned in Picton by a Mr M Montgomery (refer survey letter) & later returned to Tauranga where she was purchased by the Gagers

Leo Gager says that when Bill Ridley owned her, he changed her name back to Thetis. When Cyril Parker bought her, he discovered ‘Korama’ carved in to the tuck & changed her back again to Korama.

In Grant’s day she had varnished coamings which no doubt were original, perhaps one day, someone may reinstate her to her absolute original concept.

What kindled the discovery:

Ken’s shape eyes & a good memory combined with Harold Kidd’s knowledge & wicked database combined with the following elements confirmed the discovery.
1. Both had Ailsa Craig 24h.p. engines
2. The common position of the their engines & exhaust i.e. well forward
3. The common rounding at the waterline at the tuck
4. The reference to Bill Ridley having owned her