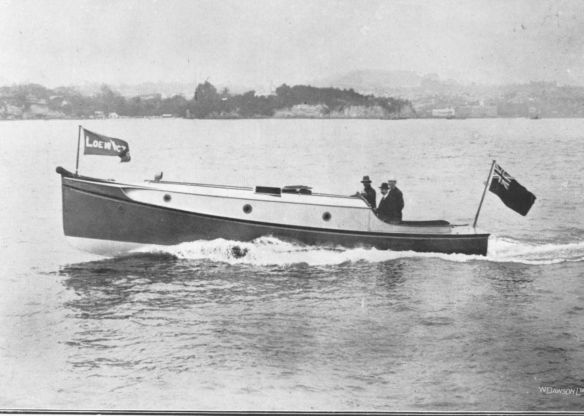 Not to sure if Loew Victor is the name of the boat or if they are are just flying the LV engine house flag – more likely both as builders / engine importers frequently named the vessel after the engine as an early form of advertising / promotion.

This originated from me at a time when Ken needed convincing about the spelling of LOEW.

Chas. Bailey Jr was the agent for the Loew range of US marine engines. The Loew Victor was a straightforward side-valve petrol engine and considered to be of relatively high performance for the time. Loew did build some Knight sleeve-valve units as the Loew-Knight (quite rare).

Yes, Bailey trumpeted the make by naming two (three?) launches LOEW VICTOR, the first a 32 footer in August 1913 with a 25hp Loew Victor engine. He sold her to Martin Wilsey of Taupo in December 1913 where she was probably renamed. Some of the Taupo experts will tell us to what.

Bailey then built the 32 footer LOEW VICTOR II in April 1914, again with a 25-40hp Loew Victor. She was sold and forwarded to New Plymouth in December 1915. Either she came back on his hands later (most likely) or he built another LOEW VICTOR II which he sold to Walter E Utting of Birkenhead in August 1920.

In November 1920 a petrol stove exploded aboard while Utting was anchored at Arkles Bay, seriously injuring Bailey’s son Athol and another. They steamed her straight to Auckland, doing the trip in 1hr 12m…… so she could shift. Athol was unconscious and quite  badly burnt, but later recovered well.

Utting (and later co-owner H Davidson) kept her until June 1935 when Utting, who lived aboard, fell from her mast and died of his injuries. She was then sold to A W B Powell, Arthur William Baden Powell (born 1901….at the time of Mafeking)  of the Auckland Museum. He retained the name LOEW VICTOR for a while, but Ken says he changed it to TANE pre-WW2. She must have been renamed again because the only trace of TANE is in Ken’s memory banks.

PS I overlooked a reference to Powell owning TANE at the start of WW2 when he was still cruising her under wartime # 78, I guess before his petrol coupons ran out. I have a lovely water-colour of Judges Bay done by Powell which has several yachts and launches, including LOEW VICTOR/TANE, hauled out “for the duration”.