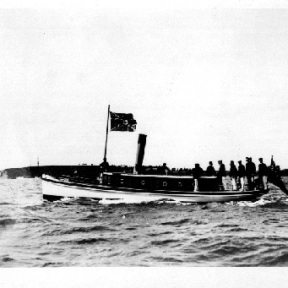 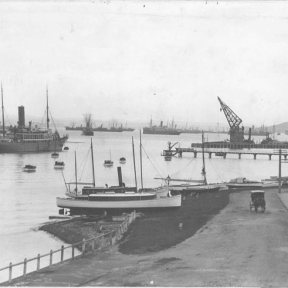 REHUTAI (the steamer)
story & photo ex Russell Ward
Here is a ship with some class.
The steamer Rehutai built for and owned (and I guess engineered) by Seagars. Who built her and when she was launched, I will leave for Harold to advise. There were several Rehutais. Scroll down to the previous post to view another.
I would imagine that she had the old faithful tandem/steeple compound that was Seagars’ stock in trade and they would have been quite capable of doing the boiler too, so I guess they did.
The first of the two pictures show her embarking and taking Lord Plunket for a jolly on the harbor. He was Governor in 1905 so that is as good a date as any. The next shows the container ship Iris moored in the harbour. You can see the craneship Mahua and some good ships around the Iris.
BUT what is this on the foreshore? A steamboat funnel? Is it the Rehutai of my dreams?
A chance glance at one of the pictures in the Matakohe museum revealed that the Rehutai was burned out at Whangaruru and lost. The records show that there was a Rehutai that was diseaslied with 50hp engines in 1934 –not sure if it is the same ship.
Bear in mind that there was an other Rehutai that became the Hauraki –looked a little like the steamer in passing. Again, I will leave to Harold to unravel.
Harold Kidd Update:
There were 3 Seagar Bros-owned REHUTAI steamers. The first was a 36 footer built for them by Bailey & Lowe in 1905. The second was a 45 footer built in April 1905 by Chas. Bailey Jr. (the one in the images above) which was sold the Government in 1910 for work at Thames and the Piako River. She had a 30hp steam engine designed and built by Seagars. The third REHUTAI was a 50 footer built by Chas Bailey Jr in December 1909 with a 35hp compound tandem engine. She was dieselised in 1926. The image on the Devonport foreshore is REHUTAI (II) with the Logan launch KARORO in front of her.
Of course it was this launch (REHUTAI II) that became HAURAKI in the ownership of the Government Lands Dept. and got dieselised in 1934.
Update from Chris Leech:
The floating crane picture looks more like the Auckland Harbour Boards floating crane – Hapai. Seen below uplifting the Devonport Ferry Co.’s Ticket office before relocating it to its new home as the Devonport yacht Club , clubrooms. C.1927. photo ex DYC centennial year book 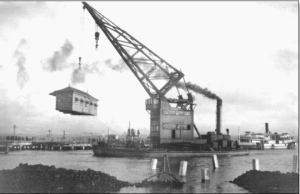 10 thoughts on “Rehutai (the steamer)”