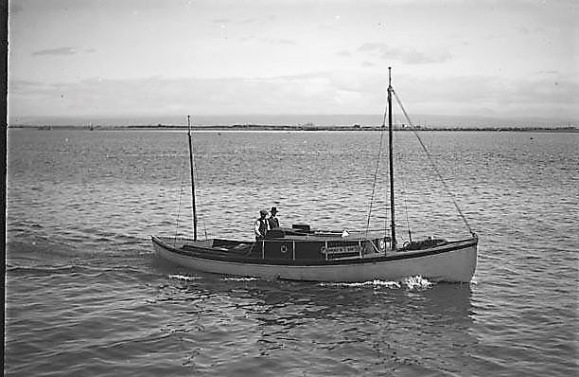 The above photos of Spray come to us from Lew Redwood’s facebook.

The only info we have is they were tagged Nelson Harbour. Her name board appears to have more than just ‘Spray’ on it, but its too hard to read

Can anyone supply more info on her?

Harold Kidd Update – This SPRAY was built c1903 by Robert Logan Sr for G.W. Kinzett of Nelson. Her dimensions were 32′ oa, 6ft 6ins beam and she had a 7hp White engine. Probably Kinzett was the local agent for Whites which were also popular in Wellington.She came ashore and was badly damaged in March 1904. Fortunately her engine was out being overhauled at Anchor Foundry. She was sold by auction where she lay at Tahuna Beach. After repair she was used for pleasure purposes but went fishing in the area after 1911.

19-06-2018 Update ex Dick Hall – Built by Ernie Lane. Altered with foc’sle head and re-named Minetta-K by Andrew Hope who owned &amp; fished her from Nelson in the 1960′ & 1970’s. Sold to Napier later and re-named Sarah-M. Trawled from there but understand she fell into dis-repair in later years and was broken up.