ALMARAY
Over the last few years the name Almaray has popped up on WW, mainly in reference to being built alongside the Lidgard launch Monterey. The shed photos below c.1946-8 shows Monterey, Almaray and possibly Tangaroa. All three were fitted with 30hp Lister engines when launched. Almaray was built by Lidgard for Stanley Bell-Booth, whose son Nick Davenport recently contacted me last week after uncovering the photos above in an old family photo album.
Harold Kidd commented on a WW story last week on the launch Jean – that the Bell-Booth family name was linked to BERNICE (1922) Stan’s father perhaps?, ATAROA (ex SPEEDWELL II) 1930-34,LADY PATRICIA (1943-48) and ALMARAY (1946 onwards). Nick has commented that his father also owned the launch Jean, somewhere in this mix.

I think I must have sun stroke –  I’m writing about a 1980 Vindex………. But despite what a certain debarred lawyer thinks, I’m actually a nice guy. So here goes – I have been contacted by 21 year old apprentice boat builder, Connor Sanderson, who has taken on a project – I’ll let Connor tell you the story”Late last year I was presented with an irresistible opportunity to purchase a very tired and rundown wooden vindex named “Vin Maree” The only information the seller was about to provide was a build year of 1980 and that it had been from Gulf Harbour prior to them moving it down to Whangamata. It is double diagonal kauri planked, resorcinol glued and coated with ample red lead. It is powered by a inline 6cyl ford I believe to be a “Dover” and had Lees marine manifolds, gearbox and V-drive. I have not yet seen another vindex in V-Drive configuration but I’m familiar with it and hope to retain the use of one. I’m eager to know more about this boat.”

MEDWAY
Taupo woody Paul Drake  came across the launch Medway the other day, on the hard at Mana Marina (Wellington).Paul recalls that she was at Taupo in the 1960’s and is clearly a sister ship to Lidgard’s Monterey.

Previously on WW there has been discussion relating to three launches built at the same time, they were Monterey, Almaray & possibly Tangaroa. Paul wondered which of the last two Medway is, as there almost differently has been a name change. WW link below to Monterey, where you can see the Lidgard factory / shed at the time of building. https://waitematawoodys.com/2013/04/14/monterey-2/
Paul commented that although in great need of a thorough paint, her good bones show through and one would think that she  will tidy up very well.

Input from Harold Kidd – According to the APYMBA records, MEDWAY was built by “Woods” of Auckland in 1952. In 1962 she was owned by Larry Bruce Johnston and then had a 100hp Ford diesel.

TANGAROA
The photos above of Tangaroa we sent to me by Alistair McRae who owns the woody Lady Margaret (the 38′, 1955, L. Deacon built LM – view link below). Alistair snapped the photos while he was (his words_ stooging around of Parua Bay, Whangarei, waiting to pickup guests for a inner harbour cruise today.
Alistair commented that he believes Tagaroa is a Logan and has recently had a very thorough refit and is in pristine condition inside and out.
Not wanting to comment too harshly on another woodys boat, but the three TV screens midships are a little OTT  😦
As always woodys, we are looking for more info on Tangaroa – anyone able to enlighten us ?
Input & photos from Craig Ogle
“Tangaroa was owned by Eden Axe and was the replacement for Pandora 3 as a longliner. She ended up out of the water is long time as Eden bought the long fin. She opened up big time and we had a hell of a time sealing her up with silicone so we could steam her from Houhora to Awanui Harbour and up the Mangatete river for haul out. Don Jackson’s son Jacko had bought her. 120 hp ford go’s like the clappers. Had a major overhaul by Don and was looking great when he was finished. Jacko steamed her to Auckland somewhere and had her for a number of years. Last I saw her she was hauled out at Parua still looking good. Obviously was before the current window set up.” 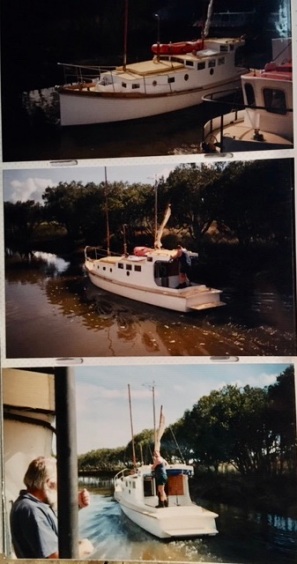 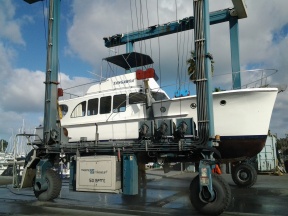 According to Bill Burrill, Seaway was built in 1953 for Fred Brake, of Riverview Rd, Panmure, by the Lane Motor Boat Company, for whom, Fred, worked for about 8 years & which was right next door to his family home. Fred was also the harbour master for Panmure, in that era, & kept Seaway at the bottom of his garden on a pile mooring & slipped her on a railed electric slipway that he built on his property.
Fred B sold her to a Mr Gray who owned the station at Man o war bay Waiheke (which he later sold to the Spencers) in approx. 1955. He died in 1959 & Max Burrill bought her through the Guardian Trust, off the estate in 1959. He changed her name to from Seaway to Tangaroa upon purchase. Max Burrill died in 1984 &  Bill Burrill, his son, bought her off his mother. Bill sold her this year (2016) to Allen Heatley.
She was moored at Pine Harbour but is now berthed at Fairway Bay, Gulf Harbour. The Heatleys intend to live aboard for the next 12 months whilst they build a property in the area.

She was originally powered by a P6 Perkins diesel when built which was replaced around 1960 with a 6-305 6 cyl. Perkins diesel & 5 years later this was also replaced with a horizontal 6-354 Perkins diesel, to fit under the floor, thereby giving more cabin room. The 6-354 died in 2000 & Bill  replaced it with a 100hp 4 cyl. Yanmar turbo diesel, which she still has today.

Hauled out at Te Atatu BC 2017. photos below ex Ken Rickets 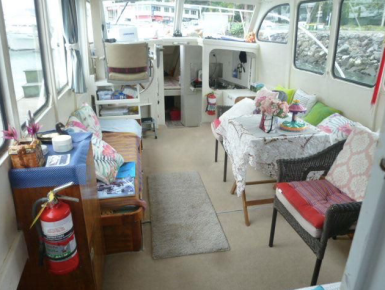 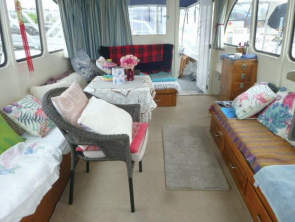