The above photo popped up yesterday on Lew Redwood’s fb and its just such a great photo it shot to the front of the ‘upcoming WW stories’ list.
The photo is ‘credited to a Deb Green and is captioned ‘ 1948 Whangarei Harbour’.
Harold Kidd has commented that he believes she is now based on the Kaipara Harbour, and had a name change c.1948, and wonders, as we do, what she was built as?
A google search comes up with a launch named Llandallah owned by a Ivan Laurence Covacich, a press clipping is titled ‘Another Launch For Whangarei Fishing’ – so this may support Harold Kidd’s reference to the launch and another boat named Sceptre in a Boating NZ Nov 2019 article on the Swales family.
I couldn’t read the Covacich related article (added below – ex HDK) as it was on Ancestory.com and signing into that is like giving the CIA full access to your digital footprint 🙂 Maybe an existing member can view it and advise if there is any further reference that might help ID the boat/s.
So woodys – any input as to her provenance ?
Harold Kidd Input – I had quite forgotten my own Boating NZ articles on the Swales family when I postulated that LLANDALLAH was SCEPTRE. “I Covacich” owned SCEPTRE at Whangarei in 1949 according to the APYMBA records. So it’s more than probable that LLANDALLAH was SCEPTRE, renamed by Ivan Covacich when he bought her from the Bay of Islands in 1948. If that’s what happened, then,
1. SCEPTRE/LLANDALLAH was built by the Swales brothers in 1913 (possibly at David Gouk’s yard in Freeman’s Bay) not by Dick Lang although she is of the wholesome type that Dick built.
2. The Swales sold her to the Mason brothers in Whangarei in 1924. They probably re-engined her in the 30s with the St. Lawrence (VALERIE had one from new)
3. Ivan Covacich bought her from the Bay in 1948 and renamed her. But why did a man of proud Croatian ancestry give her such a name which is not even Welsh???
4. One problem with all this is that the 1948 Northern Advocate piece says LLANDALLAH is 32ft when SCEPTRE was 38ft. Journalistic slip? 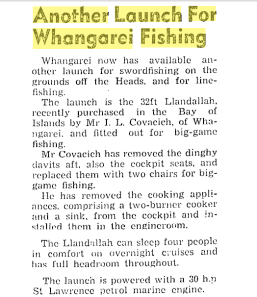 Input from Lew Redwood – press clipping below from the 26 October 1949 edition of the Northern Advocate. 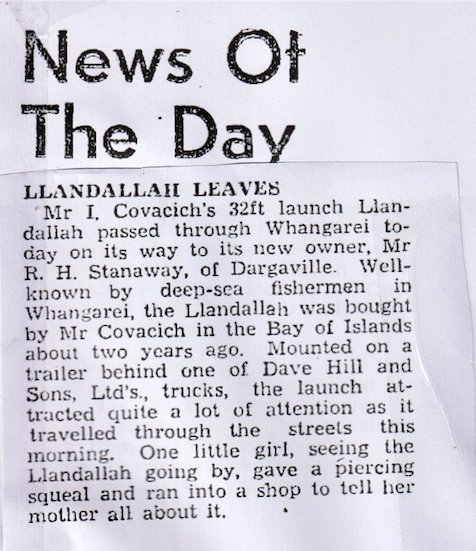 Input from Chris McMullen
Chris’s eye eye has reminded me of a ‘Mystery Launch’ photo we had once on WW, it showed a launch with a Lug sail (see below). At the time Chris printed it off at as he thought of fitting a Lug sail to Wirihana.  Reading the newspaper story on Llandallah Chris picked up on the large lug sail, he thought that was unusual for a launch and went back through his files. After reviewing the older WW photo Chris believes this is the same launch prior to having the raised cabin added. Lugsail drawing nicely. The portholes and sheer line the same.

More Input from Lew Redwood
The article below ex the Northern Advocate 9th November 1949 – again listed Liandallah as being 32’ and the 2nd article that shows Sceptre (licensed to carry 40 passengers) in Whangarei 31 Dec 1949. This all backs up Harolds view (below) that they are two different vessels 🙂

01-07-2020 Harold KiddInput Just to take the cat away from the pigeons, I’ve satisfied myself that LLANDALLAH is NOT SCEPTRE. Not only is she too small (32ft v 40ft) but also SCEPTRE was still operating as a commercial vessel in Whangarei in December 1949, weeks after LLANDALLAH had been trucked to Dargaville.
Watch this space…..or maybe not?