Ngaire
The above photo was sent in by Lake Rotoiti (Rotorua) boat builder Alan Craig. Alan spotted the photo of Ngaire on a recent trip to the Maritime Museum in Mapua, Nelson. At the time Ngaire was owned by Jack Marusich and he is waiting for a load of sheep to be rowed out to the boat. I have to saw the sheep look remarkably relaxed given the trip. The photo caption commented that they were most likely used to it and were probably being relocated to fresher pasture.  Given the load it must have been a great dinghy.
Anyone able to tell us more about this launch?
And speaking of great dinghies – check out Martin Howson’s new clinker below, built late 2019 by Dave Jackson. She measures 8’ x 4’6” and It is built out of ply and ribbed and riveted, there is no glue. Her ribs are  North American white oak, the breast hook and the quarter knees are oak, the thwarts are kauri and knees for the thwarts are oak as well
The oars at 7 ft and Martin commented that you can really put your back into rowing or just tack it easy.  The floor boards are scribed and are easily removed
for cleaning and again they are made from kauri. 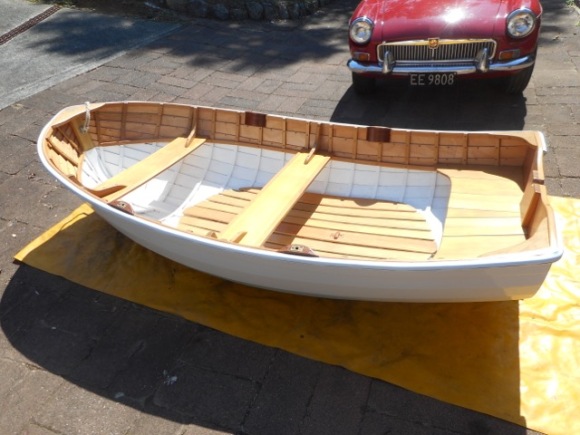