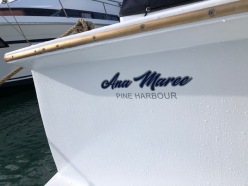 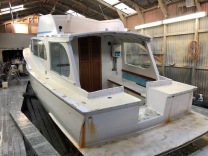 Just before Christmas I was contacted by Mark Skinner the owner of the launch – Ana Maree.
Mark sent in the above photos detailing the refit he did on her. Her home is Pine Harbour. Nice to see she got a top-chop, in my eyes 100% better looking 🙂
I do not know anymore about her but assume she is the same Ana Maree that appeared on WW back in November 2013, WW link below. Making her built in 1965 by Oliver & Gilpin and originally named Joanne.
There was a lot of chat re re provenance in the Comments section 🙂