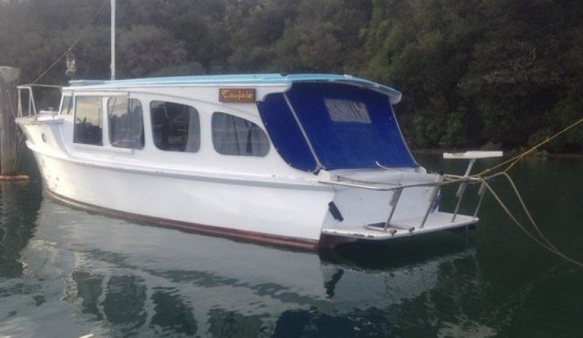 The 1931 L. C. Coultard built 31’ launch – Traveler has recently popped up on tme, another example of the number of wooden boats out there that are under the radar. She is a newbie to me.
Her hull is kauri planked and she is powered by a  1965, 70 hp, Ford (Lees) 2701E diesel engine (rebuilt). A nice entry level woody for someone looking at getting into classic wooden boating.
Can we expand on where she has been for the last 89 years?
OOPS SLIGHT BALLS UP. TRAVELER IS ACTUALLY TAUFALE. I DID THIS STORY FROM MY MOB PHONE SO  DID NOT SEE THE PHOTOS IN LARGE FORMAT. THE NAME TAUFALE IS ON THE NAME BOARDS. OWNER IS A DICKHEAD FOR USING THE ENGLISH LANGUAGE VERSION ON THE AD. I JUST ASSUMED IT WAS ANOTHER COULTARD LAUNCH.
Taufale has appeared on ww before.