Photo below taken when Happy Hours was collected ready to transport to Alan Craig’s shed.

HAPPY HOURS V13
I have been contacted by Alan Craig from Craig Marine looking for he next owner of the18’ mullet boat – Happy Hours V13.
Built by Billy Rogers in 1949 to an earlier Logan design, she was a copy of Secret  (V3) but is a much fuller boat so must have been modified during building. She was first owned by Billy Rogers’ brother in-law and then by Lieutenant Commander J. Lennox-King.
Happy Hours is currently sitting in one of Alan’s sheds waiting to be finished. But Alan commented that he has not been near it in a couple of years, he is a very in demand wooden boat builder and the current work schedule is very motor-boat focussed.
The yacht was acquired from the NZ Traditional Boatbuilding School before being passed on to Alan.
I understand that Alan’s exceptions in terms of a price are not great, he is more interested in Happy Hours going to a good home.
Alan has the mast and rudder plus fittings etc for it too.
So woodys – anyone looking for a classic wooden boat project? 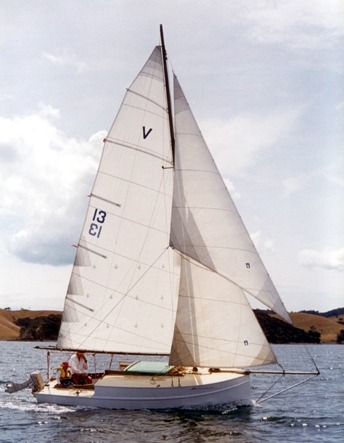 Happy Hours was built for Noel Wensor (billy’s Bro’ in law) in 1949. Lennox-King did not own her until the early 1960’s. Dean Herbison bought her in 2007 when she was hauled out at Okahu Bay.