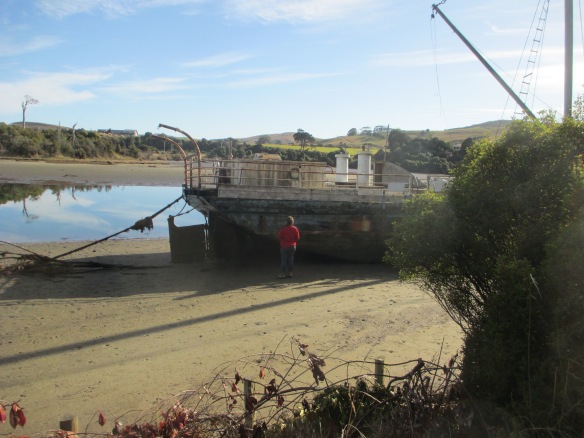 Several months ago Thames woody, Clive Monds was visiting  the Catlins area at the bottom of the South Island and chanced upon The Portland moored at the mouth of the Catlins River, see location map/photo below.
Unfortunately he was en-route to rendezvous with people so did not have much time but he did glean the following from people who lived close by.
The Portland arrived from ‘up north’ some years ago with intentions to be used for some tourism venture. She had, it seemed from the twin stacks been repowered at some point. The venture has not come to pass and she has sat for some time, rotting into the mud. There was talk to the effect ‘you could have bought her for $5’. People Clive spoke to had no idea what is happening to her.
Clive is interested if some to learn more about the vessel – can anyone shed light on her origins etc. ?

The Portland built 1910 by Geo Niccol of Auckland for John Wilson Walkworth {brother of  Nathaniel Wilson founder of Wilsons Cement Woks on the Mahurangi River Warkworth] carrying 160 lb bags of cement to Auckland. Sold 1918 to Wilsons NZ Cement Co of Portland Whangarei. Sold 1926 to Aspden Shipping Auckland trading from Auckland up north to Awanui, general cargo up butter back also running to Whakatane. Sold c.1936 to a Foxton company running between Foxton & Wellington. Sold c.1938 to Puponga  shipping Co Nelson carrying coal from Port Puponga Golden  Bay to & from the Puponga Coal Co to  Nelson, Onekaka Iron Works , Tarakohe Cement Works & Wellington. Sold 1946 Westhaven Co Nelson carrying milling machery & general cargo to Westhaven Inlet {Whanganui Inlet] Northern West Coast bringing out  timber from Mangarakau wharf to Nelson &amp; Wellington also carrying cargoes in &amp; out of Golden  Bay Ports of Tarakohe, Waitapu Collingwood &amp;  Milnethorpe   [Dolomite]  And Tasman Bay ports Motueka, Mapua & Nelson. Also Marlbrough Sound Ports of The portage Nydia Bay Havelock, Titirangi. Plus many others to Wellington. Sold to Karamea Shipping Co Nelson c.1968, continued on same runs. Made one visit to Kaiapoi  1967. Struck rock or submerged object 1972 in Cook Strait off Wellington, beached at Island Bay, re-floated, patched up at Evans Bay tio by Te Aroha to Nelson 1972. Sold as / is to group of fishermen in Dunedin, repaired at Careys  Bay yards made an illegal  trip down to Auckland Island area with mutton birders. Sold  to Mr Matheson of Owaka taken down and moored at Pounawea upriver from where she is now. The  Portland was advertised for sale 2002, in trade a boat didn’t sell. Article in NZ Marine News that she was to be taken up to Dunedin for slipping 2011. Didn’t happen. Sank at her moorings, struck by log in flood, patched  & re-floated. Sold to an Aucklander c.2016, on trial run down river she started to leak & was run up onto beach where she is now. New owner was advised his agent sold  her for $5. Was going to turn her in to back packers accommodation – so far. Edited by Alan H

10 thoughts on “The Portland”