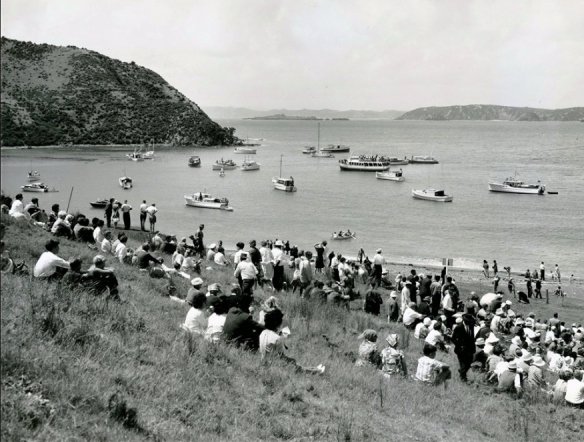 The above photo is captioned – 1964, Ohio Bay, Rangihoua, Bay of Islands and comes to us via Lew Redwood’s fb.
There is an impressive collection of classic wooden motor-boats in the bay and quite a crowd assembled on the beach / sand dunes watching something to the right (out of screen). Interesting that in the middle of the bay is a commercial boat with passenger looking ashore.
So woodys two tasks today – what’s happening and can we name some of the Woodys?
Oracle Nathan Herbert reckons he can ID most of the launches so lets see how good the rest of us (combined) are 🙂
Input from Simon Smith – In 1814 S Marsden held the first Christian service in NZ here. Thus 1964 would be the 150th celebration of that event. I suggest the photo represents the celebration of that first christmas sermon.
Nathan Herberts List Below

“The day before the 1964 commemoration event which recalled Reverend Samual Marsden’s Christmas Day service in 1814, I assisted Norman Fuller in running a wooden barge ashore on the beach towards the eastern end, just out of picture to the left. This barge was to facilitate getting passengers ashore who had made the trip on various Fullers launches from Paihia. A wooden ramp was lowered to the beach and used as an accessway. I made three return trips from Paihia as skipper of Miss Ida, carrying about 40 people per trip in perfect weather.

In identifying the boats in the photo I can name only three : ‘Bay Belle’ – a Fullers boat – and ‘Penguin’ whose home was at Purerua, an inlet within Mangonui Inlet which runs north as far as Te Tii. The people in the dinghy are rowing out to Penguin and we could surmise that two of them would be owner George Hansen and his wife whom he always called “Mum” when radioing her when he was out gamefishing.

The boat which another correspondent suggested is Fuller’s Miss Brett, I would put down as Miss Russell. The two boats were very similar but Miss Brett just had the edge in looks. I skippered both in the 60s, more so Miss Brett including for gamefishing and many line fishing trips with the Italians who were building the oil refinery at Marsden Point.
1964 was the second year of my 42 years as a Fuller’s skipper.”

11-08-2019 Input for Hylton Edmonds
“As promised – photo and story scanned and attached taken from the December 30 1964 issue of the Weekly News of Christmas Day commemoration activities at Oihi Bay.
Fuller’s Kewpie and Knoxie IV (?) in attendance complete with one of their barges acting as a landing platform, and maybe Bay Belle in your photo was awaiting its turn?
Graham (Clifford) might be able to elaborate and confirm, seeing he was there with the Ida as well.
Being too young, my Mother “dragged” my older brother and sister over there, whilst the Old Man and I stayed at home and played with all their presents, hah,  – all things considered,  a great day.”

Starting on Monday in addition to the daily woody story I will run each day a video from John Street’s recent speaking engagement that supported the exhibition – ‘One Man’s Treasures’ at the New Zealand Maritime Museum. For the overseas readers, John Street was at the helm for over half a century of Auckland’s historic ship chandlery – Fosters. Such was John’s influence on the New Zealand boating and marine scene, that the late Sir Peter Blake tagged John the ‘Waterfront Mafia’. These days John has a mighty passion for preserving New Zealand’s maritime heritage.  :
MONDAY –         Fosters The Beginning
TUESDAY –        History of The Breeze
WEDNESDAY – The schooner Daring
THURSDAY –     Amercias Cup
FRIDAY –            The steam crane ship Rapaki
SATURDAY –      Tug Boat Racing on the Waitemata 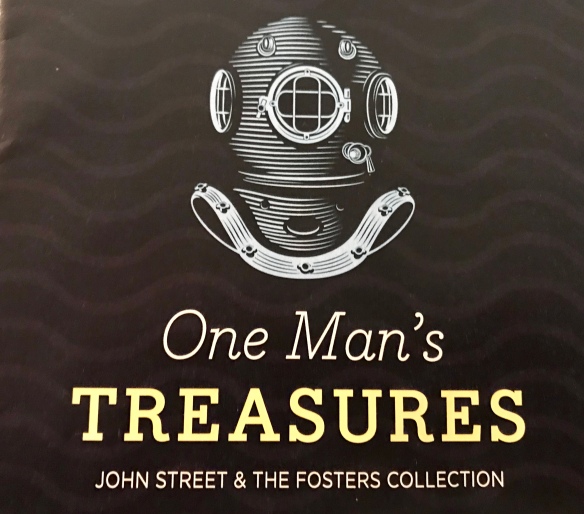