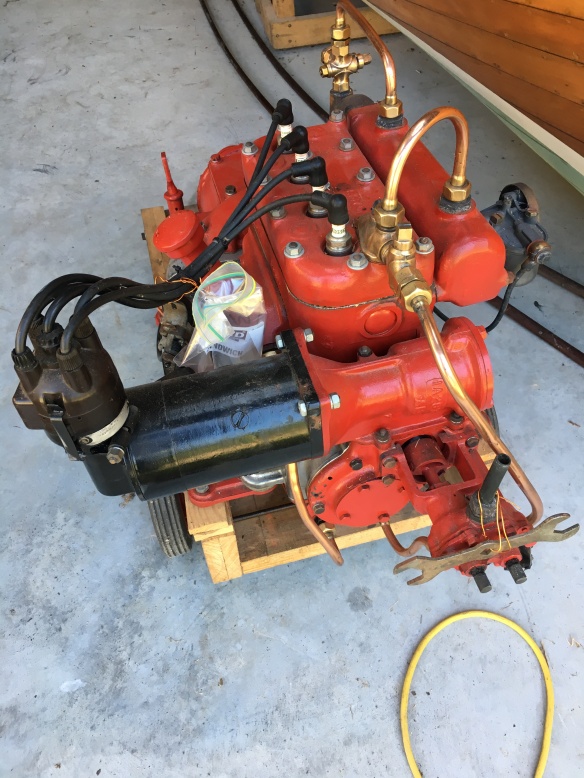 I’m pretty sure this woody was a trademe listing for a very long time, so when I received a note from Rachel Jamieson from the Lake Rotoiti Classic & Wooden Boat group telling me Micheal Booth had bought an old wooden kauri 4 seater, carvel construction speedboat for restoration and attached the above photos –  I was so rapped that she had a new owner and her restoration would be completed.
I’ll let Micheal Booth tell the story

“She  belonged to Andrew Lang the previous Harbour Master who now skippers in the Med. Andrew bought the boat in Rotoru and tracked the motor down in Rotoiti which he then restored. He had started restoration but because of his circumstances has elected to sell.

I believe the boat was used by the Rangiheuia sisters on Lake Tarawera in the early days. It is of kauri construction and has an oregon ply transom. It is powered by an Austin 7 Thetis motor. Apparently the local historian knew of the boat but has unfortunately passed away. Andrew thinks this boat was designed by the  Logans and built by Lidgard. The boat is thought to be around 1934-36.
The boat builders I have taken it to aren’t convinced and wonder if the boat was of an American design but built locally. It measures 4850mm long, 1600mm wide and 1250 wide at the stern.”
Michael is wondering if anyone may some more information on the boat.