Todays photo of the woody runabout, Miss Vauxhall, is from Robin’s collection of photos from the Whangarei Cruising Club Collection, as far as Robin knows, all are from the 1940’s early 1950’s & and were taken by Palmer Photography in Whangarei (1910-1999). Most by the late Graeme Palmer and possibly some older ones by his father.

While the boy at the helm is deep in concentration he no doubt is having the time of his life. Can any woodys ID the design of the boat & even better whose the skipper ?

I’ve just come across an article in Sea Spray  (below) on Dick Hartley in which he discusses, most lucidly, the evolution of his designs. There is the same pic of MISS VAUXHALL as well as her sections, pointing out that he could just as well built her in ply in 1947. 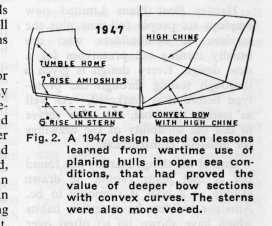