The above photo of the M-class Mermerus planning at speed is proof that you do not need composite construction, carbon fibre & space-age  fabrics to go like the stink & most likely have the crew bricking themselves 🙂
Now if you believe Ron Carters 1954 book, ‘The Glory of Sail’, she was built in 1939 by Gainor Jackson of Devonport, Auckland.

I’m sure one of the anoraks will be able to confirm this & enlighten us further.

The first photo below shows Mermerus broaching, at this stage she was heading straight for the photographers boat & everyone (including the photographer) was in trouble. With skill (luck?) she passed inches from where the photographer was standing, prior to dropping flat onto the deck 🙂

The 2nd two photos shows Mermerus safely through the gap – Maui was not so lucky.

OK ….Opening Day 1946 – in a hard westerly.
Maui, in her first race and flying, had already capsized, and Manaia had broken her mast, had tidied up her broken spars and sails and was anchored awaiting a tow. Mermerus, sailed by 16-year old Phillip Jackson, has started about 10 minutes late and was miles behind the fleet. She had blundered into all this this carnage, got hit by a puff and bore away, but too far, because the Sandspit off Devonport was dead ahead – it was low tide and running aground at speed was not a good thing.

Their crew would appear to have been all over the place because the sudden course correction to starboard to avoid the Sandspit made the spinnaker sheet hand slip to leeward, still holding the sheet, where, so I was told, he got his fingers jammed in the spinnaker block. The extra few metres of sheet allowed the spinnaker pole to sky and lift the bow. Control is absent at this point. And …. Phillip’s older brother Gainor, has just spotted a Blue Boat dead ahead !!!

Max Frommherz of Marine Photos, standing on the foredeck of the Blue Boat, takes this one iconic photograph. The only one he took in the entire sequence, but what a photo!

Mermerus is now heading straight for the Blueboat. The crew are at sixes and sevens and all over each other as the sheet hand releases his fingers from the spinnaker block, lets go the sheet and the kite flogs like crazy.

Ian Mason, photographer for the NZ Herald, standing next to Max takes this next photo.

Mermerus now has major problems and very little time to fix them. Both photographers go flat to the deck as Mermerus’ spinnaker pole flies off the mast and arcs around the forestay, zipping over their heads (Ian Mason told me he still remembered the ‘woosh’ 🙂 ) as Mermerus rounds the bow of the Blue boat and head for a very narrow gap between the disabled yachts.

Ian Mason has a snazzy fast German camera and gets the next two shots away as Mermerus threads the needle between Maui and Manaia.

Note the first of these last images: the crew of Maui have ducked for cover as Mermerus slaloms through the gap, the man on the stern just can’t get far enough away from the flailing kite pole, and you can just see the fingers of the crewman amidships flat to the top planking and clinging on to the deck. In the second image, they surface, safe and relieved, after the mad flailing beast has gone through.

ONLY 1 DAY LEFT TO ORDER WW T-SHIRTS BEFORE XMAS 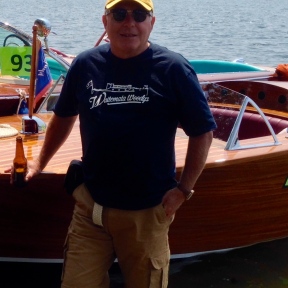