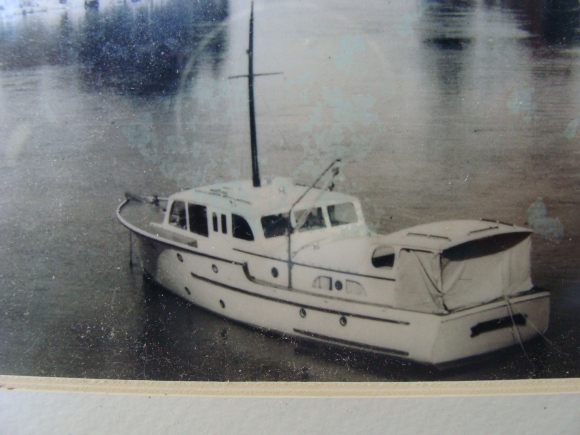 Chasing more detail on Moana & her past. She is a Sam Ford bridge decker. Note the ‘trademark’ waterline (engine room) portholes.

The full colour photo above I took at the CYA launch cruise to the Riverhead Hotel on 02/06/2014.

The b/w photo was sent in by Paul Drake & was taken c.1950’s & shows her on a mooring in Lake Taupo, near where the Waikato River exits the lake. Paul’s boyhood memories are that she seemed to spend most of her time on her mooring. Her owner enjoyed being aboard her watching the world go by, without feeling the need to go anywhere.
He also remembers seeing her transom being rebuilt, no doubt due to dry rot, whilst afloat.

Can anyone add more ?

She could be one of the two 38 footers built by Sam Ford just before the outbreak of war in September 1939. One was LADY NGAIRE for Shelley B Atkinson which does not appear as such postwar and the other was for Vern McGeady to replace his 1936 Sam Ford-built 35 footer LADY PAM, completely burnt out off Motuihe in October 1938. Again, no postwar trace.

Photo below ex Graeme Willcox of Moana on Lake Taupo c.1970’s when she was owned by Graeme’s grandfather – Dick Tylee 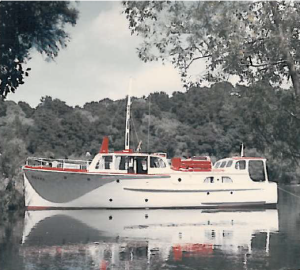