I spotted Moana at anchor in Coromandel Harbour between Xmas & New Year. A little digging resulted in a trademe listing so if you believe that, she was built by Lanes in 1954 & is a kauri carvel planked, large volume displacement launch at 42.5′. Powered by a 6LX Gardiner. Appears to by well fitted out in terms of modern day comms & navigation toys etc.

Just a pity about the block of flats on top 😦  , but as they say – each to their own.

Now my bitch of the day – why do people selling classic boats (both the public & brokers) almost never include the boats name in a listing. Makes it bloody hard to find the listing & only drops  the value, as the serious potential buyers are most likely to know the boat or know someone that knows her.

Ted Gilpin told me that she was built by Lane Motor Boat Co. for game fishing in at Mayor Island by Alan Hunter and that Peter Parsons had a hand in her design and construction. 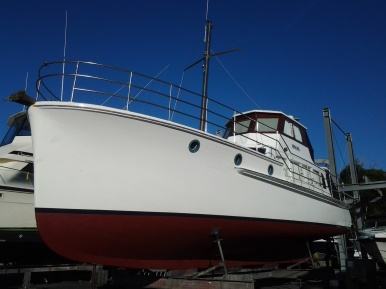