waitematawodys has been contacted by Graeme Johnson, the grandson of Harold White, a previous owner of Whizzbang, who is seeking more information on her past & current whereabouts.
Graeme was able to supply the sepia photo above of Whizzbang from his grandfathers photo collection, the only image he has of the boat.

Harold Kidd believes that Whizzbang is now ‘Ruahine’ & like Graeme is keen to shed more light on the old girl.

I have also included below some photos of Whizzbang on Lake Taupo.

1. Because of the name, I guess Harold White was a returned soldier with experience of the German shells popularly called whizzbangs in the trenches in France.

2. There was a 25ft x 6ft 6in launch hull plus 17-25hp Sterling engine for sale by auction at Collings & Bell in June 1922 at the instructions of the “Taupo Steamship Co. Ltd”. Could this be WHIZZBANG?

3. If so, who built her, Collings & Bell or Bailey & Lowe who would have at least supplied the Sterling? Either builder is a possibility from the look of her, although I would pick Collings & Bell.

WHIZZBANG is going strong at Taupo, as RUAHINE, and is in the marina at the north end of the lake. She is in very good order. She is almost unrecognizable, having had a bow lift and new cabin some years ago – about 1960 – and was sold to Taupo man Ray Perry in the early 70’s as an abandoned vessel by the local boatyard to defray storage costs. Presently owned by local man Rod Campbell. My father used to tell me that the name WHIZZBANG related to her single.cylinder engine and the way it sounded. 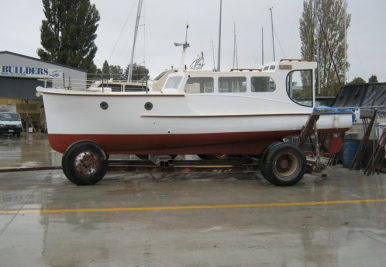 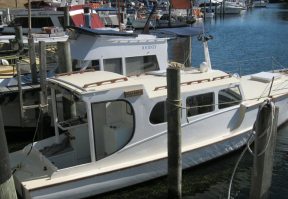