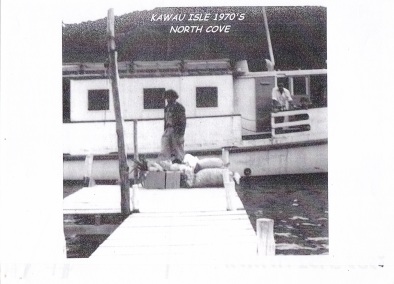 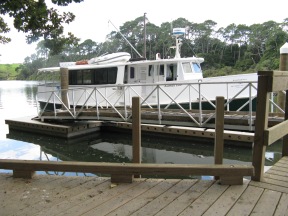 Purpose built in the early 1950’s by Roy Lidgard, in his boatbuilding shed in Smelting House Bay Kawau Island, for Alan Horsfall owner of the Mansion House, in Mansion House Bay, Kawau, for the carriage of passengers & freight, to & from the Mansion House, to the Sandspit at Warkworth, which was the embarkation point, for the vast majority of the guests, & virtually all freight, food, & most importantly, for boaties, grog, during Mansion House’s time as a hotel /guest house, which was up until about September 1967, at which time it was bought by the Government of the day & turned in to a historic place, under the Historic Places Trust.

A few lucky commuters travelled in style, by amphibious aircraft from the 1950’s onwards, — a Grumman Widgeon, piloted by a the famous, Freddie Ladd,  a delightful, colourful, extroverted, & very learned, & tremendously skilled, pilot,  see pic on the beach of Mansion House Bay, c.1954, (this photo along with the one of Mairie was scanned by Ken from 8 mm movie footage shot from his families launch, Juliana, c.1953-55, thence the poor quality). Ladd usually had Christmas dinner on Juliana, & later Gay Dawn, an entertained the Ricketts family with his seemingly endless supply, of real life anecdotes.

Mairie was approx 42 feet long & powered by a 4 cyl Kelvin diesel & served the Island & Mansion House for many years. In her later years such was the demand for her services that Lidgards built (1952) another boat for Mr. Horsfall, called Kawau Isle, slightly bigger & powered by a 6LW Gardner diesel, which in later years, took over most of the passenger load & left Mairie to do the donkey work, with the freight side of the logistics. The 6LW I understand, has fairly recently been replaced by a newer 6LX Gardner in Kawau Isle.

Kawau Isle is a traditional kauri timber motor vessel built in 1952 by Roy Lidgard at Smelt House Bay, Bon Accord Harbour. She is 45 feet in length, powered with a 6LW Gardner diesel engine and cruises at 7.5 knots.

For around 30 years the Kawau Isle operated a ferry service between Sandspit and Kawau Island. More recently she worked from Half Moon Bay as a charter boat and then Whangarei as a school ferry. She currently plys her trade ferrying day trippers to & from the Riverhead Hotel, on the upper reaches of the Waitemata Harbour.

In the bow on photo with the ‘Riverhead Ferry’ logo, the men on the bow are all past and preasent skippers of Kawau Isle. This photo was taken at Kawau Island, Bon Accord Harbour November 2012 during a cruise to celebrate the 60th anniversary to the launching of the ferry.

Note : Mairie & Kawau Isle replaced the ‘Nancibel’ – (may have been Nancibelle), which was powered with a 4 cyl 4-53 GM Detroit & ‘Kororo’ which was powered with a P6 or 6-354 6 cyl Perkins. Both of these boats were painted bottle green & given there appearance probably built in the later part, of the early 1900s. You can see the Maritana stern on, behind Kawau Isle in the 1962 pic at Mansion House Bay wharf. The back end of Kororo can be seen in the photo of a young Ken Ricketts sculling the dinghy.

Refer below article / photos that appeared in DIVE Magazine Vol 11 No3, of 1972.

Is this the same launch, Nancibel, that serviced Kawau Island. (click photo to enlarge)

The divers got into real trouble that weekend at the 20 fathom reef, Mayor Island, 3 cases of the bends, one of which died (Henry Liason).

There was another boat that hit a Mayor Island rock that weekend. It was the Edward G which flooded its engine room at the time

that Henry Liason was surfacing from a very deep dive.

Tauranga divers went out and salvaged the Gardner engine from the Nancibel the week after she sank.