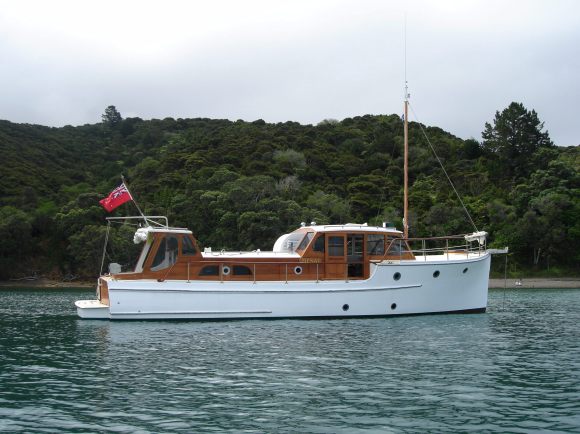 In the late 1930s, earlier 1940s, Arnold D. Baldwin, a successful business man involved in the paper & printing industries purchased the 1936 (’37?) Sam Ford launch MENAI & used her regularly until 1948, when he bought VALSAN, off Peter Annan, who had renamed her LADY EDITH, which ADB changed back to VALSAN.

ADB sold MENAI to his factory manager, Horry Whimp who loved her, at least as much as ADB & continued to pour money into MENAI, as ADB had before him. HW owned MENAI well in to the 1950s. During this stage of her life MENAI had a flat head Ford V8.

Ken Ricketts met HW’s son, Barry Whimp, as a 3rd former at Auckland Grammar in 1950, they were in the same year & became good friends, & had many happy moments together whilst away on their parents boats, especially at Kawau, at Christmas.

(b/w photos taken by Ken Ricketts show Menai over Christmas 1948 /1949  just after the Whimps had bought her, & taken at Issy Bay & Kawau. The photo of Valsan in Schoolhouse Bay was taken during Christmas 1948 just after ADB had purchased her)

Sam Ford, Ellerslie, designed and built Menai for Mr W T Reynolds of Whangarei and she was launched at Panmure Basin on 24th of December 1937.She immediately left Auckland on launching and arrived at Whangareri 25.12.1937.

She has a most interesting history, during WWII as a Navy patrol vessel she towed lifeboats from SS Niagara to safety.  She spent many years big game fishing both off Tutukaha and Tauranga and she is fine sea boat. In 1985 new owners did major renovations including the superb varnished interior. In 2007 she was purchased by the late Peter Smith who spent 3 years bringing her back to the wonderful condition she is today.

She is characteristic of the Ford design, a bridgedeck displacement launch, 10.97m (38 ft) length, beam 3.05m and draft 0.97m. Although there have been some substantial upgrades both the exterior lines and interior layout are original.

Construction: Single kauri skin (full length planking) over bolted and riveted frames and floors. The original upper works were built of kauri. In a 1985 major upgrade they were overlaid with 5/8 in teak and varnished.

A few minor things about the above. MENAI was originally fitted with an 8 cylinder Lycoming engine which was changed to an Osco Ford V8 marine conversion, possibly during her NAPS service. Arnold Baldwin bought MENAI in 1942 when he was skippering her with NAPS and registered her as a British Registered Ship in 1948. According to those records and to the contemporary APYMBA records, Whimp did not own her at all, but that may well have been because he didn’t want to carry on the BR. Certainly, however, the BR records and the RNZYS records show that MENAI was 100% owned by C.B. Menzies from 1950 onwards. How Whimp and Menzies fit together, I have no idea.